5 Ways to Spice Up Your Lateral Raises

1.618:1. While you may not be a mathematician, you should know this ratio. Otherwise known as the “Golden Ratio,” it’s an arrangement of two numbers or measurements where the relationship between a and b is the same as a+b is to a. That may sound a bit confusing, but looking at it visually can help clear up what it means to a lifter.

Aesthetics, bro! That particular proportion can be found in nature, in things like leaves and trees, and has been used to structure everything from sculptures to architecture to analyzing financial markets. It’s also a standard the golden-age bodybuilders considered as the ideal physique: the shoulders measuring around 1.6 times the waist. Diehard aesthetic-seekers can also find ways of making it apply to your biceps and quads, but honestly, it works better on the shoulders. So, let’s focus there, shall we?

The humble lateral raise has been the width-builder of choice for lifters chasing the golden ratio (whether they knew it or not) for many years. And for good reason: When the movement is done with strict technique, it very effectively targets the lateral or middle deltoid and not much else. In fact, one study concluded that the middle deltoids generates up to 65 percent of the torque generated during glenohumeral joint abduction—the term for lateral raise in the exercise physiology world.[1] (Pretty much all of the rest of the torque is generated by two tiny rotator cuff muscles, the supraspinatus and subscapularis muscles, which, if we pointed them out on your body, would be more or less visually indistinguishable from your medial delt anyway.)

The message for you? First, don’t skip lateral raises. And second, have many, many variations in your arsenal to keep your shoulders growing for years.

How To Lateral Raise Correctly

Since the deltoids are a relatively small muscle, strict adherence to proper technique is important to optimally target the middle deltoid, and not have other muscles, like the traps, take over the movement. The natural tendency of a lifter is to cheat their way through a heavy set of lateral raises, which may overload the shoulder muscles, but isn’t very safe.

Here’s your step-by-step guide to properly perform a lateral raise:

Not too hard, right? Now, let’s spice up this bodybuilding classic to bring your delts up to golden-age status.

This is a great variation on the lateral raise that will have your delts screaming at you. 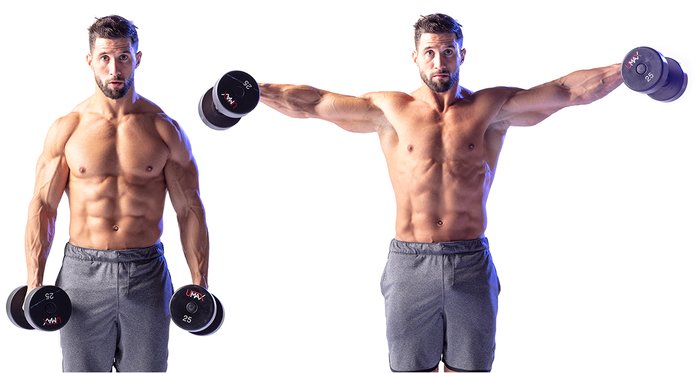 Variation 2: Combine It With Arnold Presses

Arnold loved his lateral raises. Of course, he also loved Arnold presses. So why not combine the two in his honor?

This is a simple enough protocol: Perform 10 lateral raises, then with the same weight, perform 10 Arnold presses. The weight will feel light for the presses, but that’s the idea. Next, immediately perform 9 raises, then 9 presses. Continue this sequence, dropping a single rep at a time until you reach 1 rep. At JKC conditioning, we normally only perform one descending ladder set to cap off our shoulder workout, pun intended. 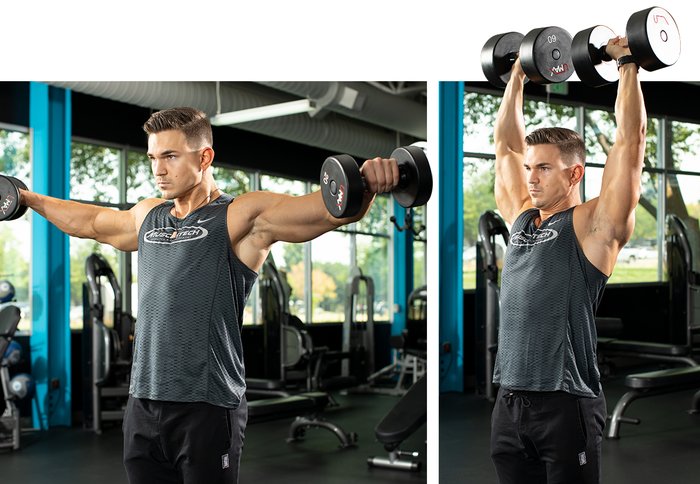 For those new to Arnold presses, start with a dumbbell held in each hand in front of your chest, as if you just finished a supinated (underhand grip) biceps curl. Press the weights overhead as you rotate your arms. Finish with the dumbbells overhead with your palms now facing forward. Return the weights to your chest by rotating your arms in the opposite direction.

As noted above, the lateral raise is generally performed in the standing position with the arms raising from the sides of the body to the 90-degree position. So how do you get a greater range of motion? By leaning, of course.

To do this, find a sturdy post that can support your weight. This could be the post on a power rack or cable tower. Grab the post with one hand. Move your feet into the base of the post and stack them together. Now, hang from the pole with your hand so your body sits at about 45 degrees from the post.

With the other hand, using a dumbbell, perform a lateral raise, being sure to control both the up (concentric) and down (eccentric) phases of the movement. This technique is great to keep constant tension on your delts throughout the set. For a great delt finisher, try alternating left to right with no rest for 3 sets of 16-20 repetitions. 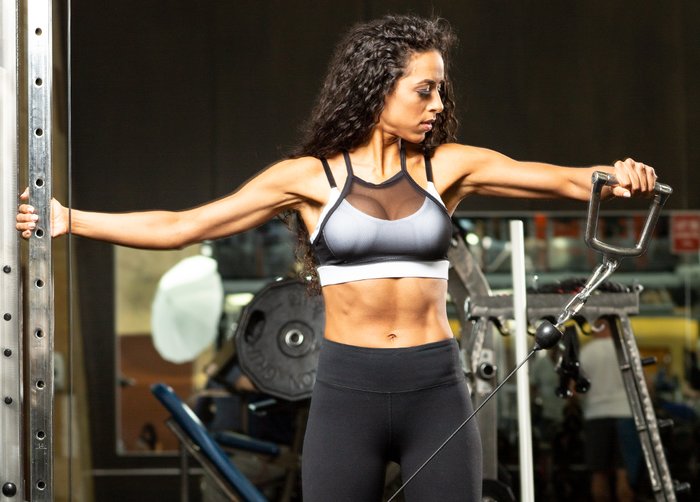 That’s a version you may have seen before. If so, try this one instead. Lie on your side on a bench that is set to a low incline. Hold a dumbbell in your top arm. Perform a lateral raise while moving through the full range of motion slowly. At this angle, the side lying lateral raise also keeps your delts under constant tension throughout the movement. Similarly to the leaning lateral raise, try alternating between sides with no rest for 3 sets of 16-20 repetitions.

Typically, the lateral raise is done with dumbbells. While dumbbells are a great tool for muscle-building, they do not provide uniform resistance—that is, there are points in the movement where it is harder/easier.

For uniform resistance, try using a cable or band, or if you want to look hardcore, a chain in each hand. The best part about these implements is they provide a smooth resistance throughout the range of motion and force you to remove any jerking that you may have a tendency to introduce into the lateral raise.

To increase the lever and to challenge your grip strength, try holding light kettlebellswhile performing the lateral raise. We suggest holding very light bells, like between 5-15 pounds, since the goal of this variation is to keep the kettlebells parallel to your arm as you raise them up to the side.

This will challenge your grip strength as you’re preventing the kettlebell from turning in your hand. Your delts will also feel a bigger challenge as the center of the weight you’re holding will be farther from the shoulder joint.

How To Program The Variations

If you feel like your delts look more like pinballs than cannonballs, try introducing some of the above variations into your regular program. We suggest trying each variation for a three-week cycle, then moving to the next variation, so that you have some consistency in your routine, and then a fresh stimulus when you need it.

Ioanna Kallimachou
Previous post5 Health Foods You Should Stop Throwing Away
Next postScience Speaks: Push-ups and abs exercises save lives!